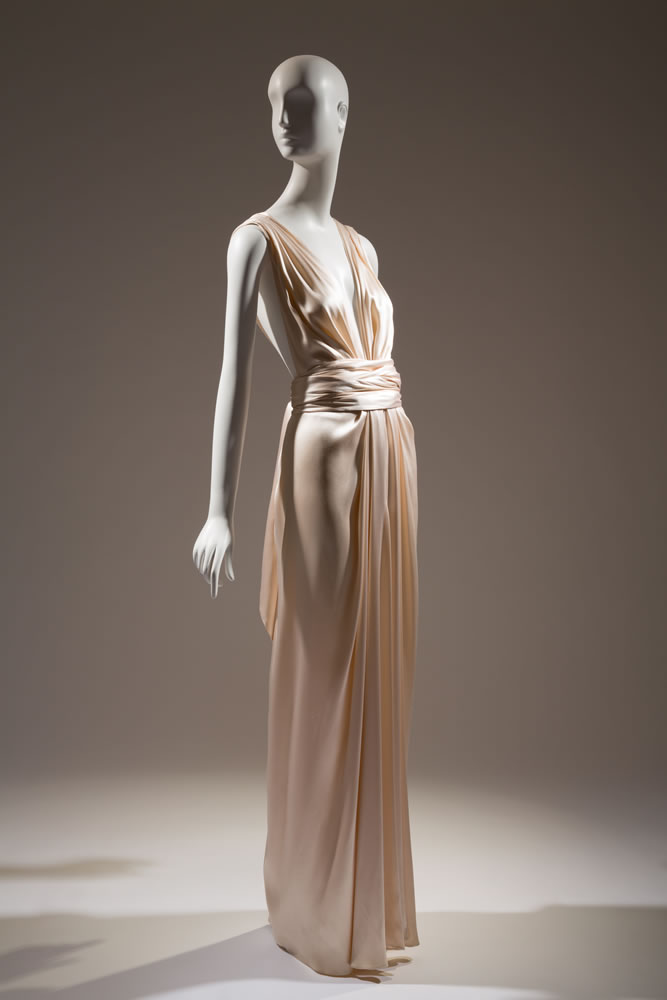 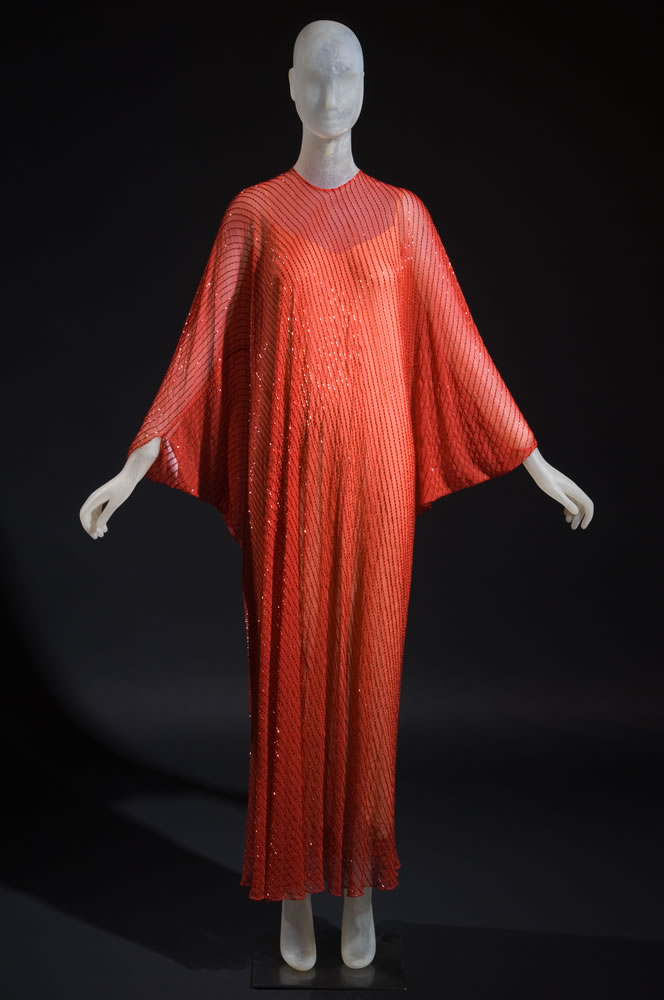 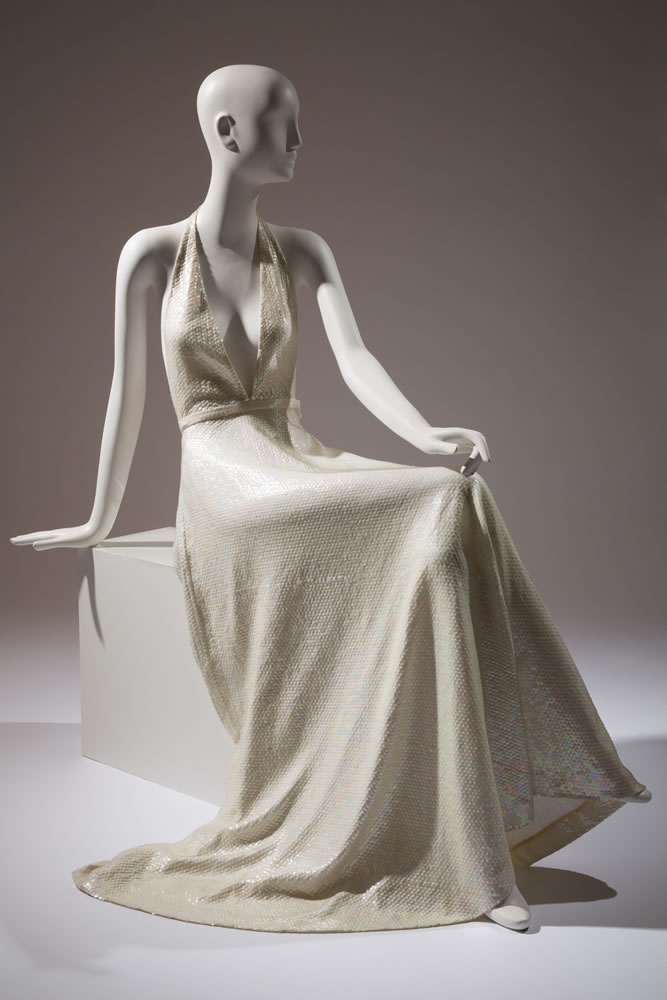 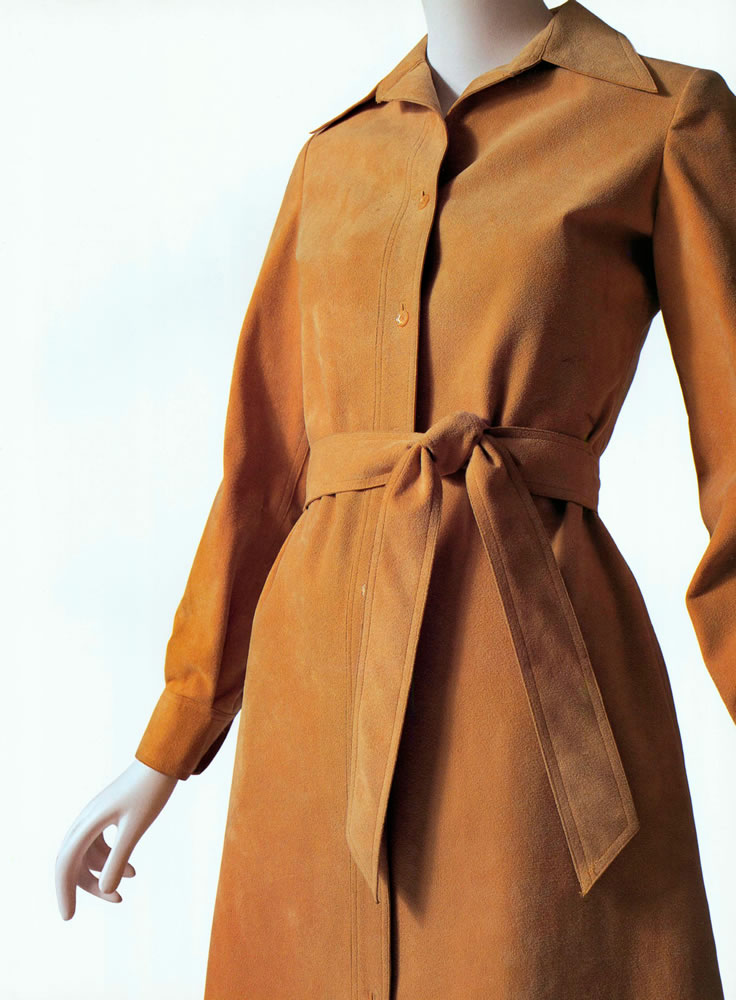 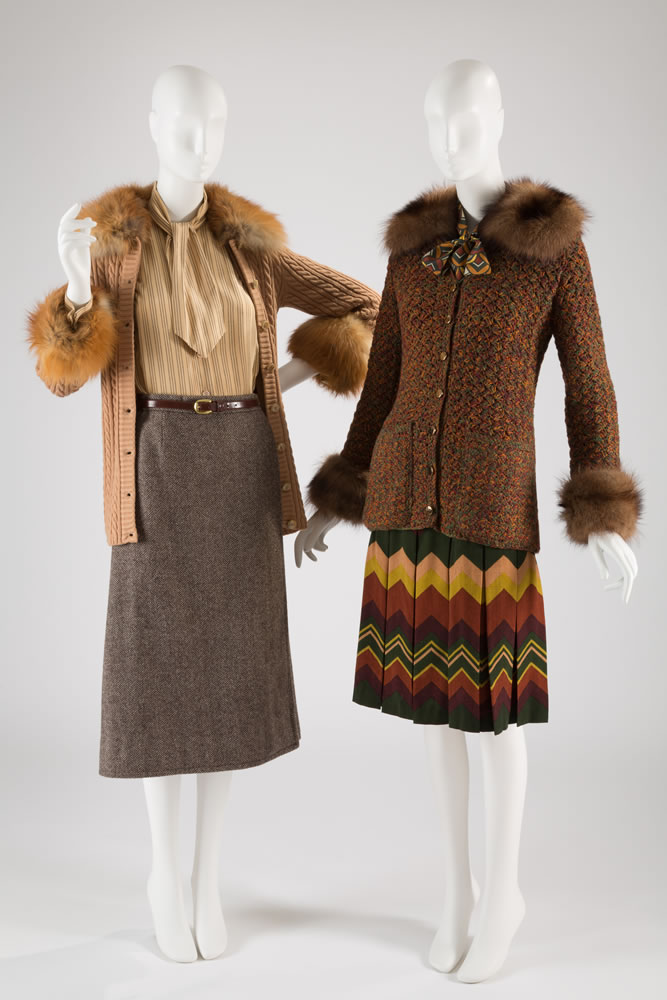 Yves Saint Laurent + Halston: Fashioning the ’70s is curated by Patricia Mears, Deputy Director of Museum at the Fashion Instiute of Technology, and Emma McClendon, Assistant Curator, of The Museum at FIT, New York. The local presentation of this exhibition is generously underwritten by Patty and Jay Baker, Lety and Stephen Schwartz and Waterside Shops.

The 1970s were a time of momentous change in fashion. This dichotomic decade — sandwiched between the countercultural 1960s and the opulent 1980s — witnessed the demise of haute couture’s majestic reign and the ascendance of designer-led conglomerates. Furthermore, the “shifting sands” of high fashion included the dramatic relaxation of dress codes, the incorporation of vintage and “ethnic” clothing, and adaptations of historic modes, from Art Nouveau to Art Moderne.

The two designers who most brilliantly defined and dominated the 1970s were Yves Saint Laurent (born in Algeria, 1936-2008) and Halston (born Roy Halston Frowick in Des Moines, Iowa, 1932-1990). Not merely the decade’s most influential and celebrated clothing creators, Saint Laurent and Halston are among the best known fashion designers in modern history. They have been the subjects of countless books, documentaries, and exhibitions, yet their creations have never been directly compared in any in-depth, significant manner — until now. Yves Saint Laurent + Halston: Fashioning the '70s is the first exhibition to analyze and juxtapose their aesthetic developments at the peaks of their respective careers, from the late 1960s to the early 1980s.

During the first few years of the 1970s, Saint Laurent and Halston held remarkably similar ideas. This aesthetic overlap was a by-product of how the designers responded to the era’s fragmented styles, and it was crucial to their maturation as designers. By the middle part of the decade, their work diverged and came to represent the two defining looks of the period. At one end of the spectrum was Saint Laurent’s broad range of creativity, which encompassed his brilliant use of color, drama, and fantasy. At the other end was Halston’s mastery of modernism and minimalism. This exhibition traces their parallel developments and highlights the distinctive creations unique to each designer.

The exhibition also presents less well-known but vital aspects of their design careers. Saint Laurent’s ready-to-wear Rive Gauche line, for example, was the starting point for his legendary couture during this period, a fact that, over time, has become obscured. Halston, who was dismissed by some as a maker of simple, overpriced clothes and a purveyor of licensed products, was in fact a prodigious innovator of couture-quality construction methodologies. Their hallmarks are displayed by identifying three themes both designers embraced and popularized: menswear, “ethnic” (or non-Western) styles, and historic revivals of the not-so-distant past.

Another element of the exhibition is a timeline that delineates the designers’ parallel careers, beginning during the 1950s and concluding at 1984. It traces Saint Laurent’s early rise to fame as chief designer at the venerated couture house of Christian Dior when he was only 21 years old, and Halston’s beginning as a milliner in Chicago, before his foray into clothing design in New York during the 1960s. The timeline includes important milestones, such as the growth of their respective businesses and their transformations from designers into celebrities, when both Halston and Saint Laurent became as famous as the clients they dressed.

All the objects on display in the galleries were drawn exclusively from The Museum at FIT’s permanent collection. With such narrow parameters — two designers and one museum’s holdings — the exhibition is neither a survey of 1970s fashion, nor a retrospective of either designer’s work. Yves Saint Laurent + Halston: Fashioning the '70s is instead a curatorial exploration that offers a re-evaluation of Saint Laurent and Halston, set within the larger cultural landscape of the dreamy, indolent, sexy 1970s.

This exhibition is accompanied by the lecture Yves Saint Laurent + Halston: Insights on Their Work During the '70s on November 17, 2015.