Home / The Baker Museum /Past Exhibitions /Jorinde Voigt
Back to Home

Cartographies of the Untold 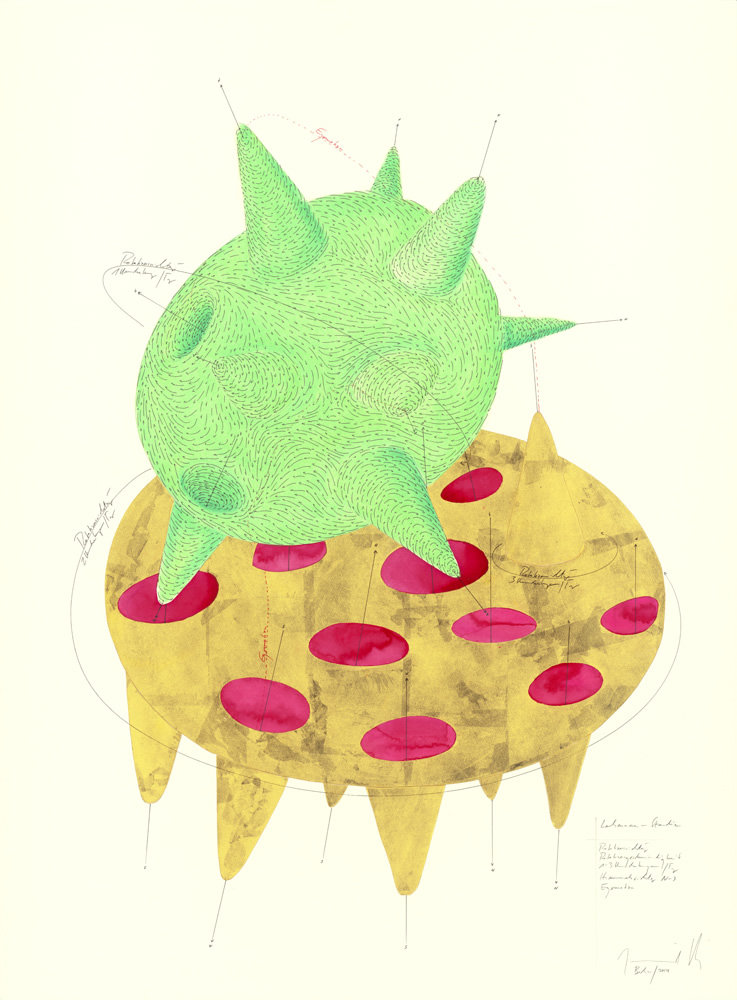 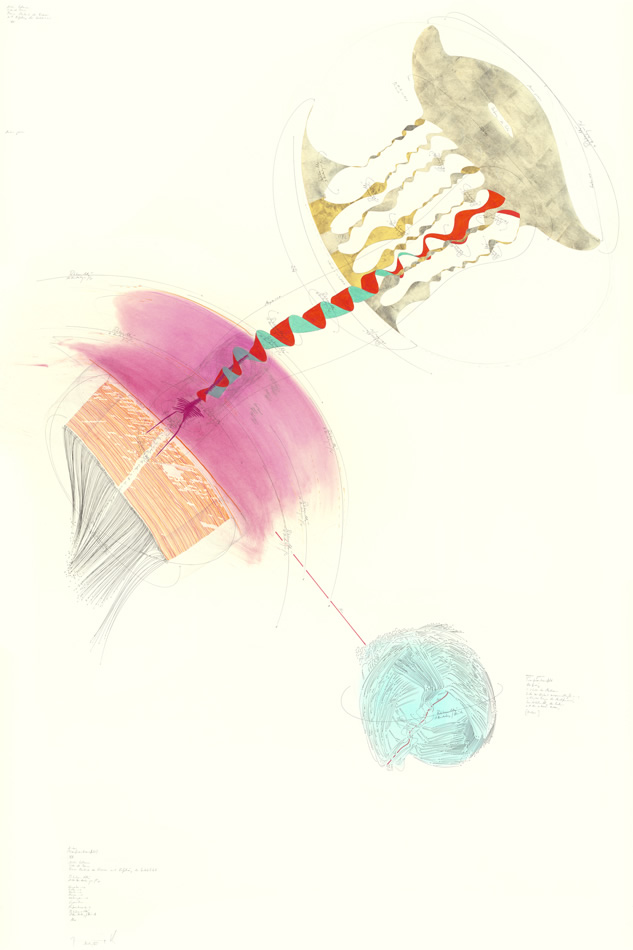 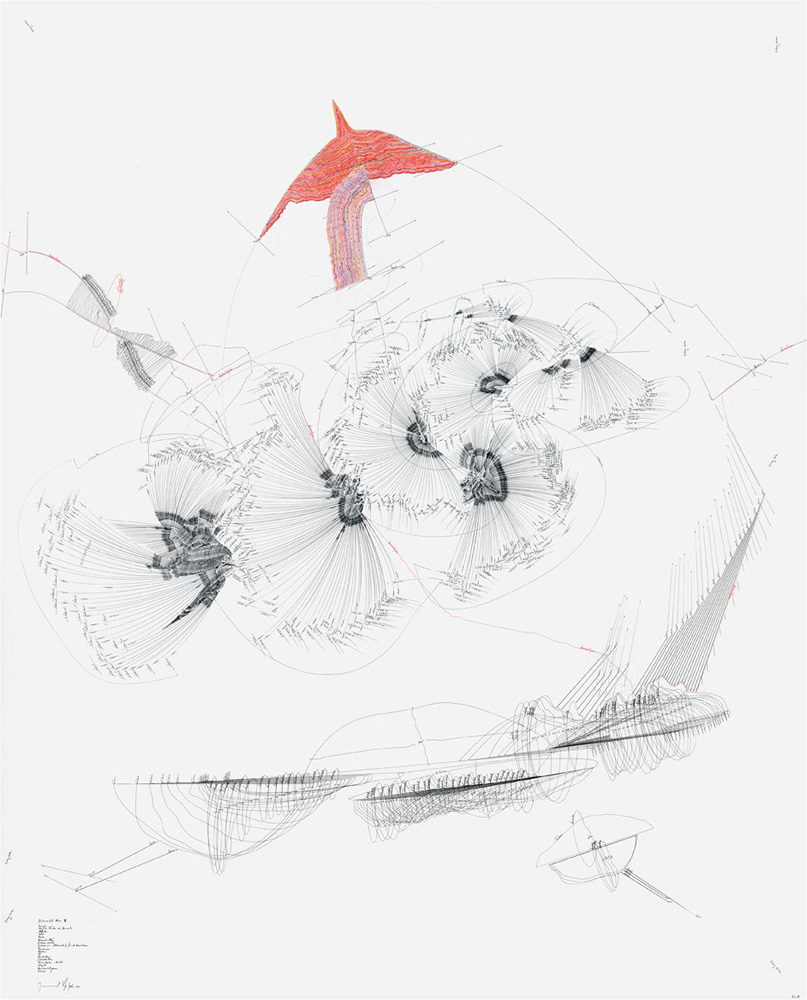 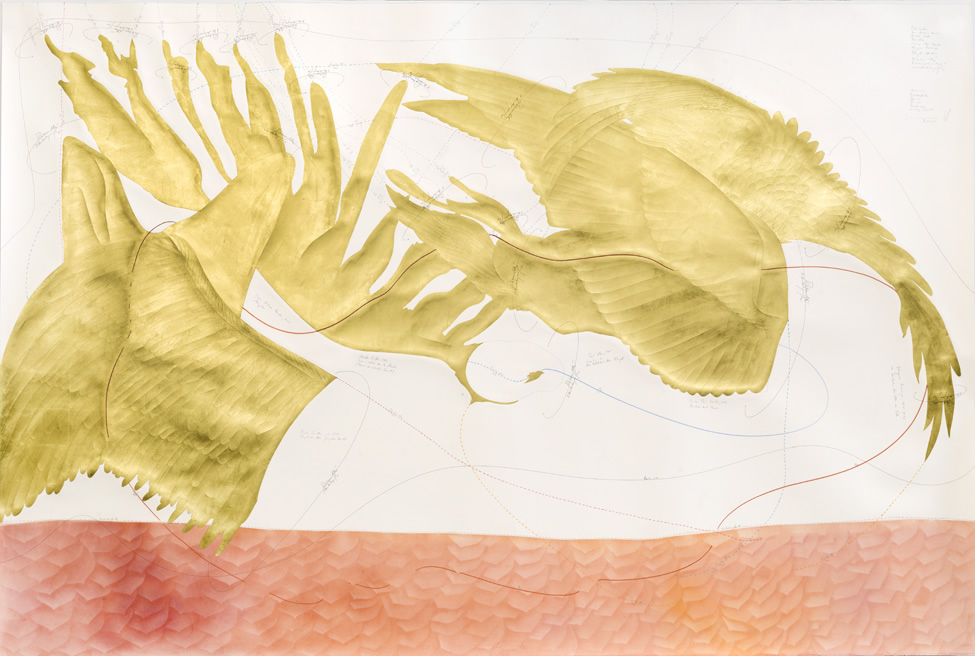 Jorinde Voigt’s oeuvre challenges the semantic limitations of language by graphically interpreting the ideas conveyed in literary, musical, scientific and philosophical works. The artist develops this semiotic translation in a variety of formats — drawings, texts, paintings and installations — as well as through the use of several techniques, including pencil, oil stick, ink, watercolor and collage. Inherent to this modus operandi is the elaboration of a graphic code that reflects Voigt’s sensitive approach to the multidisciplinary sources she appropriates in her artistic practice.

When transcribed onto paper, this code is conceived as a score or “performative notation,” which attests to the artist’s music education: a thought is unfolded in matrices of flowing lines oriented by time vectors and spots of vibrant colors that represent eloquent aspects of the works she interprets. Therefore, the code emerges from the overlap of temporal, spatial and dynamic dimensions and interconnected layers of meaning. Along with the variety of books Voigt transcribes into her drawings, from Roland Barthes’ A Lovers Discourse: Fragments to Niklas Luhmann’s Love as Passion: The Codification of Intimacy, the density of references she addresses in each composition adds to her oeuvre’s syncretism.

With a free hand and delicate marks, Voigt takes straight lines and curves, numbers, words and collage elements and develops them into a visual grammatology that maps her phenomenological perception of the world. The potential of the artist’s codifying method enhances her work’s universality — as does her oeuvre’s virtual nature, for it amplifies the apprehension of reality and its consolidated meanings. As a metalanguage, fused from intellectual sources of different natures through a process which is both self-regulated and spontaneous, Jorinde Voigt’s production embodies the infinite expressive capacity of creative thought.

Born to scientist parents 38 years ago in Frankfurt am Main, Voigt studied philosophy, comparative literature and sociology at the Freie Universität of the German capital before enrolling in the Berlin University of the Arts, where she graduated in 2003. Ever since, Voigt’s artistic practice has earned global recognition: not only has it been shown in solo and group exhibitions throughout the world, but it has also been collected by museums such as the Centre Pompidou in Paris, the Museum of Modern Art in New York and the Art Institute of Chicago. The recognition of Voigt’s oeuvre extends to her reception of the Otto Dix Prize in 2008 and the Daniel & Florence Guerlain Contemporary Drawing Award in 2012. Since 2014, Voigt has been teaching conceptual drawing and painting at the Academy of Fine Arts, in Munich. Currently, she lives and works in Berlin.